Buy your 50/50 tickets by clicking below.

Come and support your Council.

Before the pandemic, our  meetings were held at St. John Bosco Church unless otherwise noted.

Welcome to Knights of Columbus Council 1049!

Our Council encompasses members from the Parishes of St. Francis Xavier and St. John Bosco in Brockville, Ontario. As a Fraternity of Catholic Gentlemen, we provide service to our church and the broader community.

Our Order was founded on the principals of Charity, Unity, Fraternity, and Patriotism. Officially chartered in 1882, the Knights of Columbus now has 1.8 million members and more than 14,000 councils worldwide. Read our newsletters to see what we do in the community.

Read all about it in Council 1049 Knightly News!

Thanks to the efforts of Father Michael J. McGivney, assistant pastor of St. Mary’s Church in New Haven and some of his parishioners, the Connecticut state legislature on March 29, 1882, officially chartered the Knights of Columbus as a fraternal benefit society. The Order is still true to its founding principles of charity, unity, fraternity and patriotism.

The history of the Order shows how the foresight of Father Michael J. McGivney, whose cause for sainthood is being investigated by the Vatican, brought about what has become the world's foremost Catholic fraternal benefit society. The Order has helped families obtain economic security and stability through its life insurance, annuity and long-term care programs, and has contributed time and energy worldwide to service in communities.

The Knights of Columbus has grown from several members in one council to more than 14,000 councils and 1.8 million members throughout the United States, Canada, the Philippines, Mexico, Poland, the Dominican Republic, Puerto Rico, Panama, the Bahamas, the Virgin Islands, Cuba, Guatemala, Guam and Saipan.

All Knights of Columbus are offered the opportunity to elevate to the Fourth degree within the order. While retaining membership in their respective local Councils, Fourth degree Knights may join their Area Assembly to work with brothers from four other councils in the District.

A Message from your Fourth Degree brothers:

Fourth degree Knights foster patriotism by teaching responsibility in civic and national affairs. We are the visible arm of the Catholic Church; you often see us dressed in regalia at major events. We work for peace and human dignity.

The tuxedo, chapeau, cape and sword are worn to symbolize Christian knighthood. The sword is carried in reverence to church, Eucharist, country and freedom.

If the sanctity of life, family values and true religious freedom are to survive, then we need to all members to elevate to the third degree and consider completing their journey to Knighthood by joining the Fourth degree.

Then join us online and come to our next meeting.

The Knights of Columbus is a fraternal organization of Catholic men, 18 years of age and older, who are committed to making their community a better place, while supporting their Church. Being a Knight is more than camaraderie; it is being involved with your community; it is supporting your local Catholic Church, while enhancing your own faith; it is about protecting and enhancing your family life. Our members can avail themselves of many different insurance policy options.

Check out our local Council 1049 newsletters.

Check out the Knights of Columbus official international website. 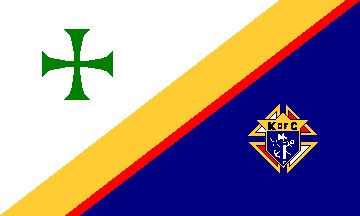 The Knights of Columbus flag combines red and colours from the emblem of the Order, yellow from the papal flag, and white and green from the expeditionary flag of Columbus. A broad band of yellow and a narrow band of red, in parallel, divide the flag diagonally from the lower left to the upper right corner. The triangular blue lower field contains the emblem of the Knights of Columbus. The triangular white upper left field features the green cross of the ensign flown by Christopher Columbus on his voyages of discovery. The design of the Christopher Columbus ensign is pictured below. 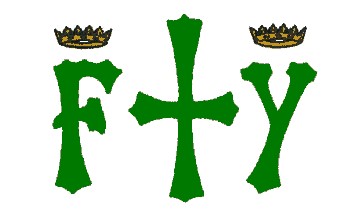 The flag was first hoisted in June, 1988. It measures 3 feet by 5 feet. Indoor and parade quality varieties use gold fringe, cords and tassels.

Three elements form the emblem of the Fourth Degree. A dove floats over a globe showing the Western Hemisphere in Western Europe as the New World Columbus is credited with discovering. Both are mounted on the Isabella cross, a variation of the Maltese cross with knobs at the end of each of the eight points. This cross was often found on the tunics and capes of the crusading knights who fought for the Holy Land. Isabella was Queen of Spain and the Patron of Christopher Columbus. Spiritually, the symbols of the emblem symbolize the three persons of God. The Globe represents God the Father, Creator of the Universe. The Cross is symbolic of God the Son, who redeemed mankind by dying on the cross. The Dove represents God the Holy Spirit, the Sanctifier of Humanity.

The colours of the emblem, the Red Cross, white dove and blue earth are the colours of the United States flag where the Order was founded. The elements serve as a reminder that the principle of the Degree is patriotism but also that the Order is thoroughly Catholic. The cross is eight-pointed and has the form of four "V" shaped arms joined together at their tips. Its design is based on crosses used since the First Crusade. The eight points symbolize the eight points of courage: Loyalty, Piety, Frankness, Bravery, Glory and honour, Contempt of death, Helpfulness toward the poor and sick, and Respect for the Church. The Scabbard Buckle has four letters (T, F, M, M) which stand for "Tempus, Fugit, Menento, Mori". These words translate to "Time Flies, Remember Death". It is a reminder that each of us is mortal and that we all will die.